At Wisconsin Garlic, we believe that information is the most empowering thing an individual can acquire.

With that in mind, we offer all the information on garlic we can provide including our growing guide, our information page and the Timeline to Your Table found below. 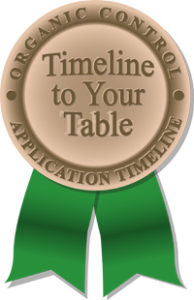 At Wisconsin Garlic we believe that actions like irrigation are symptoms of other issues. Garlic, for example, is a water-intensive crop, pound-for-pound. That, by default, means garlic will grow best in areas that provide the right rainfall and moisture-holding soils. Areas where garlic should not be grown will express that fact by requiring a lot of irrigation.

In California it takes, on average, 75 gallons of irrigation to produce 1 lb of garlic. In Wisconsin, it takes 15 gallons at most per pound and 2 out of 3 years, no irrigation is necessary at all due to high average rainfall and natural rich, loamy soil.

In 2016, we had a very dry and very hot June and July. With late season cold/frost, everything was 2+ weeks late. This means the growing season lasted until the end of July. We used approximately 15.68 gallons of water per cleaned/cured pound of garlic for the 2016/2017 season.

When real costs are "hidden" and not counted due to subsidies and other political/economic shannanigans, garlic can be grown in the desert cheaper than in Wisconsin and other places that would naturally produce better results. Fortunately, hidden costs are not zero costs. Someone/everyone pays, and eventually, the reality of "no free lunch" destroys the facade of subsidies and hidden costs.

That is happening now with crops from California as the drought lays bare the true cost of irrigating in arid or desert climates.

Why we chose to not be Certified Organic

The term Organic is, truly, misleading. Organic does not mean pesticide or chemical-free. There are many chemicals used on organic crops that are derived from things like flowers, roots, leaves, etc.  The assumption that these have less impact on people and the environment than lab-created chemicals, because they are made from things like flowers, is not logical and, in many cases, not true. Many chemicals that can be used under Organic Certification are toxic to people.  New research is coming out that shows many are carcinogenic in lab tests with rats.

We want to be better than "Organic Certified."

We utilize natural chicken manure and hard wood ash (potash is about 6% of wood ash) or equivalent organic commercial fertilizer (some seasons chicken manure is not available in less than pallet lots - a pallet is several acres worth or 120,000+ bulbs) as fertilizer that is tilled in before planting and supplement with topical organic fertilizer the following spring. Nothing else is applied and all planting and weeding is done by hand.

* Best Flavor By: Store garlic in a cool, dry place until ready for use.  Depending on variety, you will get 5-9 months.  Warm/hot temperature and moisture will decrease storage time.